No matter your lifestyle, the simple act of living places enormous stress on our bodies. Our immune systems are constantly being bombarded by harmful contaminants in our food, air and water. These factors contribute to the build up of free radicals that attack our bodies on a cellular level causing illness, cancer and premature aging.

As revolutionary as this may be, what exactly is hydrogen? Furthermore, why should hydrogen be included in your water?

What is Hydrogen Rich Water – The history of it:

Over the last few hundred years, hydrogen gas has demonstrated a therapeutic effect on over 150 human diseases, as well as enhanced health and well-being. The people of Japan have been bathing in Hydrogen Rich water for centuries, their natural hot springs, known as Onsens, are sought after for their salubrious and invigorating effects. It is well documented that dissolved Hydrogen gas is what gives the waters of Nordenau, Germany and Tlacote, Mexico, their medicinal prowess. 1978 marks the earliest record of hydrogens’ medicinal properties, where cases of inflammation were successfully treated. The topic did not gain true popularity among scientists until 2007, when an article on the benefits of hydrogen was published in the prestigious journal of Nature Medicine.

The science of it:

Hydrogen is colourless, odorless, tasteless and non-metallic. It is the lightest and simplest element in our known universe, expressed as the symbol ‘H’. It is comprised of just a single electron and proton. Under regular conditions it exists primarily as molecular hydrogen (H2 gas). In this form, hydrogen has been shown to exert an extensive range of therapeutic effects. When H2 gas is present in water it is referred to as Hydrogen-enriched water and is simply conventional water (H2O) that contains dissolved hydrogen gas (H2).  For example, there are carbonated soft drinks such as sodas and sparkling waters that contain dissolved carbon dioxide gas (CO2). In contrast water that contains dissolved hydrogen gas, is the best bet for a longer, healthier life. Paragraph Footnote: * We do not recommend those types of beverages for improving health. Hydrogen is the smallest molecule in the universe; this minuscule proportion allows for a smooth diffusion into the sub-cellular compartments of the mitochondria and other locations in the human body. 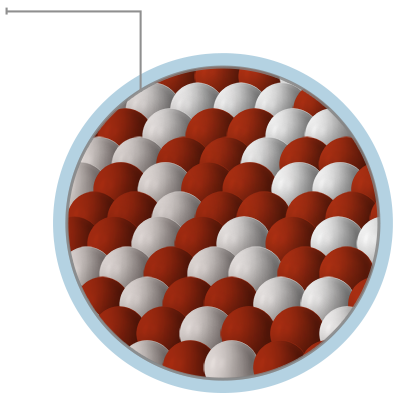